Does standing on a street corner change the world? I wondered that as I stood with about 15 other folks at an intersection in a quiet New England town, population 4,124, with a racial diversity score of about zero.

What was I accomplishing? Was anything achieved?

Maybe not. But two days after the white supremacy rally in Charlottesville VA, I felt the need to do something. And standing with signs that read “Peace” and “End Bigotry” and “Love is louder than hate” helped us bear witness to the powerful vision of hope. It was a way to say “no” to that hate-filled rally. 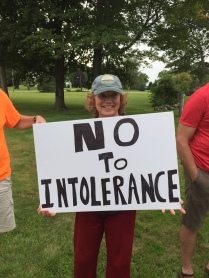 One man in a truck shook his head and gave us a “thumbs down” signal. I wondered exactly what he was disagreeing with. Peace is not a good idea? Diversity shouldn’t be encouraged? But it was not a place for conversation so I’ll never know what his thoughts were.

Mostly we heard horns honking as drivers smiled and waved or flashed the peace sign. One bicyclist shouted, “Good job!” as he sped past. Several people shouted, “Thank you!” as they drove by.

The world didn’t change on that Monday afternoon. But our voices of hope and determination were heard. A witness to peace, unity and love was given.

I stood up for peace because I didn’t want the marchers in Virginia to have the last word. In our media-saturated world where images of angry torch-bearing racists fill our screens, it’s too easy to believe that their voices were the only ones speaking.

But this ragtag group of women and men, one little girl and a couple of dogs stood together for peace. And that action was repeated in towns and cities across our country. Those gatherings – big and little, at rural intersections and city parks – are a reminder that every action of kindness, love and welcome is important.

It’s time to do what we can, in big and little ways. In some ways, it’s easy to stand up against obvious hatred like Nazi flag-wielding thugs. It’s clear they are on the wrong side of history and that their message has no place in a fair and equal democracy. They are dangerous and disturbing, but in a loud, in-your-face kind of way.

Subtle forms of racism are more challenging to recognize and rebuke. I hope our street-side gathering also reminds us to be aware and stay attuned to the many ways that too many people are treated differently.

These actions, taken together, can change the world.

“Never doubt that a small group of thoughtful, committed citizens can change the world; indeed, it’s the only thing that ever has.” – Margaret Mead

3 thoughts on “Standing up for Peace”